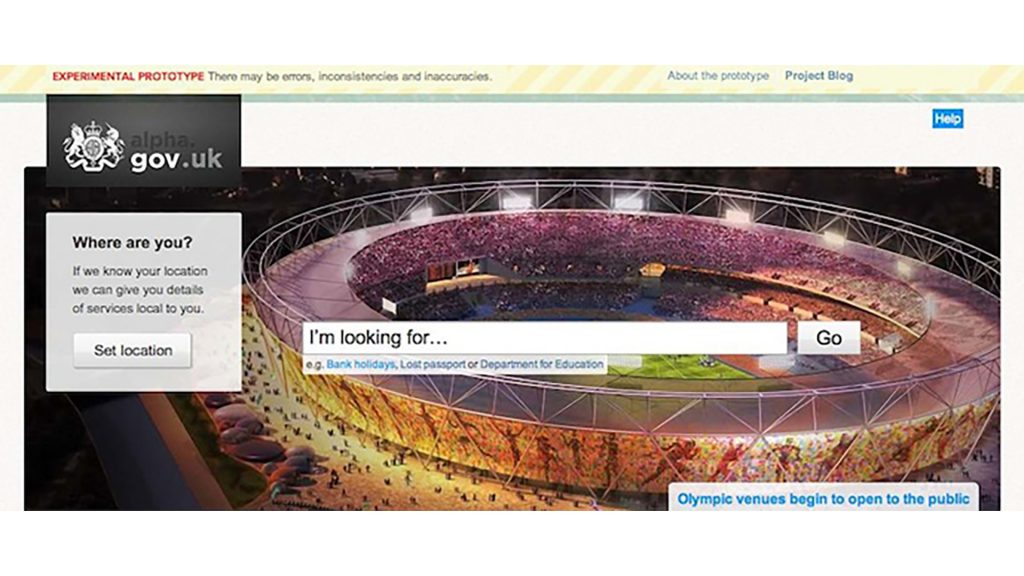 A few weeks before it launched, Tom Loosemore kindly invited me over for a preview of the Alphagov prototype. I was given a whirlwind tour of their agile process and some of the thinking behind their work. Not to mention a very dark – and thick – cup of coffee. Hey, I’m not complaining. I like it that way.

I met a few of the team (some of whom I already knew), and watched as a group of Government Communication types were taken through the same whirlwind tour – a mix of curious and skeptical faces making up the lot.

On the whole, it was a pleasant visit.

When Alphagov launched a couple of weeks ago, it was amusing to watch the crowd of people – who several years ago berated pretty much anything we did at Directgov – practically fall over one another in praise of Alphagov. Surely, if they are happy there must be something to it.

Certainly the £261k spent on the project didn’t bother them. In fact, it was considered a bargain.

However, after a couple of weeks of love, the veneer began to crack and UX expert Lisa Reichelt chose to write about ‘Opportunities Lost – AlphaGov’, while Steph Gray, former BIS digerati chose to write about ’10 Things that Alpha.gov.uk gets wrong’ – in 2 parts (Part 1 & Part 2).

This past weekend, I attended the OpenTech conference in London, and attended the Alphagov team session. There were a number of interesting questions and points raised by the audience – and not very many fully formed answers forthcoming from the team – with some answers unfortunately missing the mark entirely.

In general, I’m delighted to see that the Alphagov project has sparked so many conversations about the Government digital content landscape.

When I worked for Directgov and variably headed up the Product Design and Innovate teams, there was a general sense across Government digital types – and from colleagues outside of Government – that we were exiting the era of websites as destinations, and that content (and services) were not fully distributable commodities, e.g. through mediums like social media and devices.

‘Convergence’ had lost its sense of purpose because users no longer expected to only find content (or services) in one place. They were learning that they could find information, services, social connections and a voice in places where they naturally reside and not have to go searching for it.

Alphagov, on the other hand, seems to not only take on Directgov’s historical remit of convergence, but according to one of the Alphagov team at OpenTech, takes it a step further resulting in the dissolution of all Government websites, making Alphagov the UK destination site for all things Government.

David Varney, himself, couldn’t have put it better.

Though the Alphagov prototype is ‘pretty’ (and I’ll come back to that later), what I was most looking for in the project was revolutionary thinking about how the content sourcing issue would be solved.

With thousands of pages representing many millions of words of content sitting across Government, all in quite different formats, some accessible via feeds, some inaccessible and requiring content scraping, what was the plan to source (and make relavent), in a sustainable way, content from across all of Government’s assets?

From their own blogs and comments, the Alphagov team scraped content, adding editorial and curation on top. Expedient? Yes. Sustainable? Probably not.

Directgov already has a Publishing model whereby approved editors write content with their departments and it goes through a process of ‘curation’ ending up on the site.

While the Directgov model is probably a bit too process-laden (as many things in Government become over time), I’m not sure that the Alphagov project, which should be more than just a collection of pretty pages with scraped content demonstrating a possible end-state, has even tried to posit a solution to the content origination, curation and publishing problem currently faced by Government.

Going forward, I believe this is still one of the largest challenges facing any such effort.

Revolution – or a change from one institution to another – in this instance does not necessarily mean success.

When developing a prototype or creating a demonstration in a limited amount of time, one avenue you can take is to pick off the low hanging fruit. For me, the Alphagov project is a demonstration of that approach.

Given the prototype – which of course is all we have to judge the success of the project by – it would appear the team has yet to:

These two things are not mutually exclusive if you want the process of engendering Revolution to succeed.

Putting the emphasis on Google

For years, Directgov has spent millions of pounds purchasing key words, advertising, etc. Because of this, they have reduced the amount of direct traffic coming in to the home page. While this puts less emphasis on the home page, it puts significantly more emphasis on the navigational structures of the internal pages to perform and inform users of other content (and services) on the site.

While the idea of relying on Google seems interesting, it really only works when all of your content is indexed and large numbers of people have hit the pages to help determine any sense of weighting or relevance.

If you deep link to the prototype at the moment, the only real means of navigation to other content seems to be via the search bar. This assumes that NO users are browsers and that the page they have landed on contains enough information to satisfy their search. Of course, the premise is that if they do not find what they are looking for, they will ‘pogo’ from the site and initiate a new search on Google. This is, in fact, sustained by research conducted by Directgov several years ago.

One worry, of course, is that unless Government intends to continue to pay a significant amount of money to Google for key words and paid search, is complete reliance on paid search engines such a good idea? And of course, doesn’t this further promote the idea of Government as a destination, rather than support the direction of content and services as distributable commodities?

And one incidental point, as the prototype has been developed to work as though people are using Google as the primary search method, there is currently no real means of testing Alpha.gov.uk to see if their premise actually works. All visitors will go to Alpha.gov.uk, entering the site via the home page.

Alongside the talk of this being a User-centred design (UCD) project, there has been a lot of talk about their use of Government site analytics and web logs. Nowhere has there been discussion of user testing with real users, persona development, or other means of Qualitative research used in a UCD process.

From all accounts – and from their own words – they have designed based on the ‘what’ of analytics and not the ‘why’ of a qualitative UCD approach.

Additionally, to ignore IE6 – used by the Public Sector and many large public organisations, and Accessibility, they have denied those in the Public Sector and those with assistive technology needs the opportunity to participate in the discussion about improving Government digital services.

Just as Lisa Reichelt stated in her aforementioned blog post, I don’t believe they can claim to be a user-centred project when in fact they ignored most of the basic precepts of a UCD approach.

Is too much design distracting?

This is a small point, but for an Alpha prototype, I would question the level of design they have used. In some ways I’m not surprised. Solving the real problems of how you build such a site in a scalable, sustainable way would inevitably lead you back to something similar to a Directgov model, albeit scaled down to prototype size. And I imagine that no one really wanted to go there.

By focusing on the design and not being able to answer questions around it’s scalability and sustainability, is this just an exercise in form over function?

If we make it look nice no one will look to closely at what we’ve done.

An alpha should have set about to answer more fundamental questions. It should have looked at the problems it ran into during development and asked, how do we fix those problems? How do we ensure that as we iterate this prototype, we move closer to a sustainable and scalable model for development?

Perhaps those questions have simply not yet been articulated to the public. I think there is some opportunity for some real debate here. Collaboration with the public over how to solve the content issue could result in revolution. Or it could end up with simple iterations to Directgov’s existing process of publication – boring old evolution.

Is Project Austin the real Alpha?

A few years ago, Directgov undertook a project called Project Austin. Austin was an attempt to postulate a metadata driven model for delivering Government content (and services). Research was undertaken, personas developed, content strategies looked at, a prototype was developed (tested and iterated), and then… well, I don’t know.

What happened to it?

It was predominantly designed and developed by individuals who came to Directgov from the Commercial sector. They worked with Civil Servants and external research agencies to develop a new model – sound familiar?

Did the Alpha team take any cues from its predecessor, Austin. Did they review the work? Did they learn any lessons? Did they find anything of use from the project?

Does having a predecessor really make Alpha a Beta?

What have you learned?

This brings me to my last thoughts (and some questions) on Alphagov.

Three months is a good amount of time to form some opinions and make some decisions about what you would have done differently, whether you think you addressed the right issues, what obstacles you see in taking the next steps.

Given that you have opened the site up for comment for a couple of months, does it make sense to keep changing it during that process? If you think of this as a consultation of sorts, you wouldn’t expect the consultation to keep changing as people commented. Do you think iterating it while you’re getting feedback will possibly cause you to change things that an accumulated set of responses might cause you to look at differently?

Will you continue to use your blog to keep people informed? And will you publish the feedback and thinking that you receive? There were a lot of comments at OpenTech at the weekend. Will these be captured and published?

And purely selfishly… how much will Alphagov cost going forward? We’re told the project cost about £261k – was that to get it to its recent launch?

#
I’d like to commend the team on doing something we had difficulty doing from within Government – getting a prototype out for public comment. This would have been inconceivable a few years ago. With the change in Government it’s nice to see some things are changing in the digital space for the better. For that you have my admiration. Despite any concerns I’ve voiced above, I think it’s important that efforts like this are taking place. I believe the team that undertook this project was highly capable.

That said, I really wish they had placed some dedicated UX people on their team. I wish they had focussed more on identifying and tackling the work that needs to take place to make it sustainable and addressed the issues of how to get content from so many different sources into a single place – other than scraping it.

But I think this team has raised some big questions for all of us to consider and have certainly gotten discussion going around all of these areas, which should be supported by all of us who have an interest.

I look forward to the next steps…

Previous ArticleAgile as the processNext ArticlePervasive UX – Who is Responsible?